The geometry, the physical properties of the simulation and the boundary conditions are defined using the program graphical user interface called PIDSMCconfig. PIDSMCconfig runs under the X Window System. After starting PIDSMCconfig, the user needs to select the dimensionality of the data set. The main window of PIDSMCconfig in 2D mode and in 3D mode is shown below.

The menu provides load and save commands in the file section as well as configuration dialogs in the setup section. The file extension used for PI-DSMC configuration files is ds2 and ds3 for 2D and 3D data sets respectively.

The geometry definition usually begins with the configuration of the domain. To configure the domain, click on Setup in the menu and select Domain and General. The window shown below will appear. 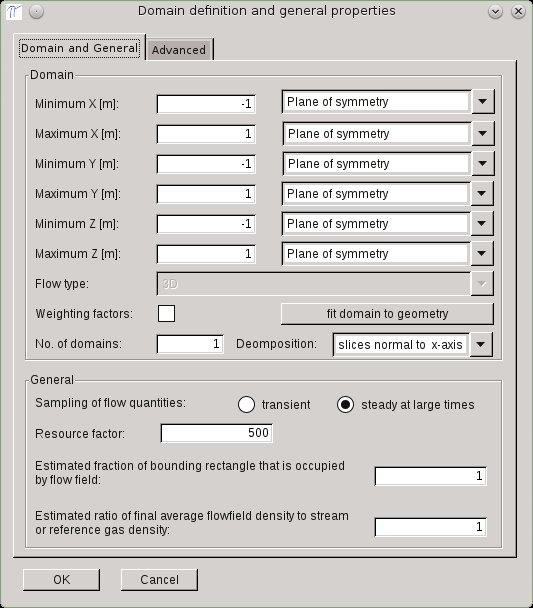 In 2D the flow type can either be planar or axially symmetric. PI-DSMC does not support radial weighting factors. For 2D planar simulations, the minimum and maximum x and y coordinates must be defined.
For 2D axially symmetric simulations the maximum radius (maximum y) must be defined additionally to the minimum and maximum height (x-axis). The x-axis (y = 0) is the axis of rotational symmetry, therefore the minimum y is set to zero.

A boundary condition must be selected for each of the four domain boundaries. The following options are available for all boundaries:

In 2D the minimum and maximum x boundaries can be periodic boundaries.
The minimum y axis can be the axis of rotational symmetry in axially symmetric flows. This option is chosen automatically when "axial symmetric flow" is selected.

The resource factor determines the coarseness of the computational grid and the number of real molecules per simulated molecule. For simulations with small density variations the resource factor must be increased, until the quality requirement (mcs/mfp < 1/3) is met everywhere in the flow.

The estimated fraction of bounding rectangle that is occupied by flow field should be adjusted when large areas of the domain are filled with solid.

The estimated ratio of final average flow field density to stream or reference gas density should be adjusted when flows with large pressure gradients are simulated. The number of real molecules represented by each simulated molecule is proportional to this factor.

After the parameters have been entered, the computational domain will be shown in the main window. The grey box represents the domain boundary. Please, note that the view is not to scale.

To edit the properties of a line segment double click on any line segment. The following dialog will appear.

Each line segment can be either a straight line or a circle segment. The coordinates of the circle center are constrained by the geometry. If one coordinate is entered, the second is computed automatically.

The surface is closed when the corresponding check box is checked. A closed surface must contain three points at least.

There are three different surface types:

The definition of a flow entry surface is straight forward. The flow is characterized by three velocity components, the temperature, the number density and the fraction of each species.

The stream boundary is similar to the flow entry surface but the parameters are those of the reference gas.

PIDSMCConfig will generate a separate surface group for each surface patch. The properties of the surface groups can be edited as in the 2D case.

The definition of the reference gas is straight forward. The required parameters are the number density, the temperature, the vibrational temperature if any species has rotational degrees of freedom, three velocity components and the fraction of each species.

There are two possibilities to define a molecular species. First, the species can be selected from the list of predefined species. Currently, the following species are available: Hard sphere molecule, Maxwell molecule, ideal/real oxygen, ideal/real nitrogen, argon, hydrogen, helium, xenon, nitric oxide, carbon dioxide, carbon monoxide, atomic oxygen and atomic nitrogen. The dialog for the configuration of the gas mixture is shown below.

Please note: This page applies to PI-DSMC V3 which runs on CPUs.